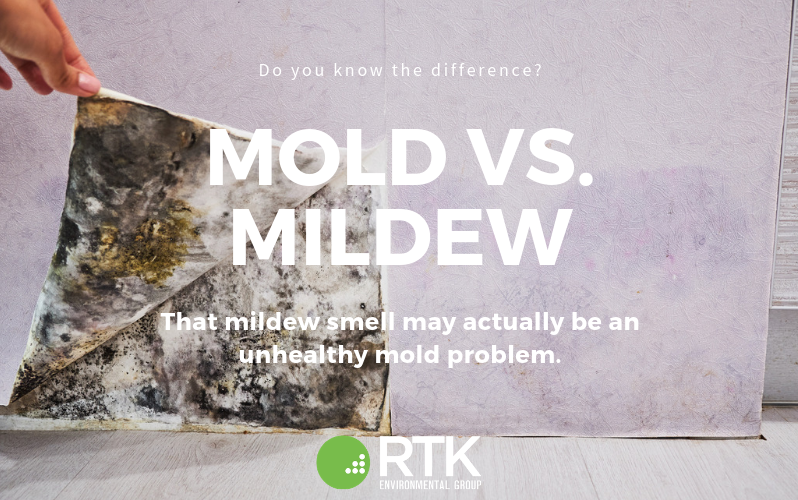 Do you know the difference between mold and mildew? For many, that mildew smell may actually be an unhealthy mold problem.

What do mold and mildew look and smell like?

Molds tend to be green or black, and usually grow underneath the surface of anything that has gotten wet. Its’ texture can be fuzzy or slimy. Mold has a strong, musty odor.

Mildew is typically white, gray or yellow and grows on the surface of moist, warm areas. Mildew smells similar to mold. If you have a musty odor, you should to test to ensure it’s not mold. The smell of mildew often masks a larger mold problem.

Where are mold and mildew found?

Mold is typically found in basements, attics, and behind walls, whereas mildew is often found on floors, walls and tubs.

Mold is found in indoor and outdoor spaces that have gotten wet, such as crawl spaces, garages, basements, HVAC units, sheds, and attics. Mold is often hidden from view.

Mildew often thrives on items that have damp surfaces, with tile, wallboard and leather being some common household items that might end up with mildew after they get wet. It’s often found in bathrooms.

Health Risks of Mold and Mildew

Both mold and mildew have similar negative affects on your health.

Have your home tested by a professional if you think you have a mold issue.

A Guide to
Mold Inspection & Testing